How did we let this stuff happen?

So, Hysteria was an essentially made up mental illness that originated to explain away any and everything that was plaguing a woman which can be dated back to the 6th Century BCE. The name derives from the Greek word for uterus, “hystera.” They believed that hysteria was caused by the uterus “wandering” the body causing problems or obstructions throughout.

If that didn’t work, they’d remove the uterus altogether and call it a day.

This wasn’t a treatment so much as a severe mistreatment of the mentally ill that persisted for over a hundred years at the Bethlem Royal Hospital in London. Bethlem, also known as “Bedlam,” is a notorious facility that opened as a hospital at some point in the 14th century is still operational today, though it’s very different than it was in the past and is housed on different grounds.

The Hospital has gotten a bad rap over the years and for very good reason—it was overcrowded and inhumane in it’s heyday. One of the worst things that they hospital did was allow the public to pay admission to tour the facility and gawk at the patients in order to raise revenue. Despite all of the other horrors that happened at Bedlam, this practice is considered one of the most demeaning in the hospital’s history. 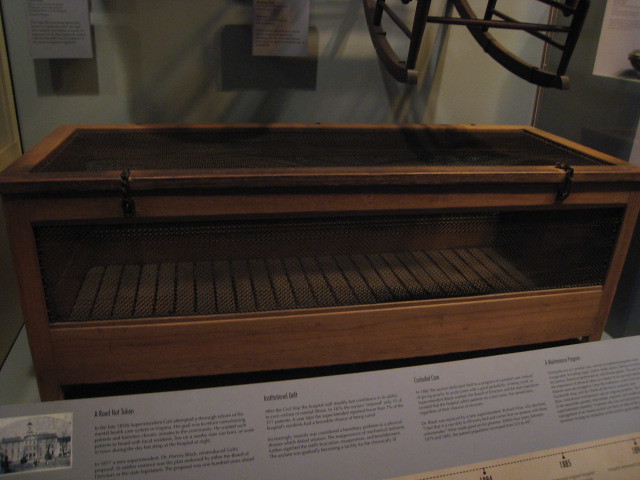 Invented in the 1840s by Amariah Brigham at the Utica State Hospital, the Utica Crib was a semi-horrifying, yet sometimes therapeutic, means of restraint for unruly patients. The device was essentially a bed-frame made of wood or metal with a caged top that closed to lock the patient in for hours (and sometimes days).

Though use of the device was ruled to be mostly torture, there are some patients who reported that being in the Crib did bring them a sense of relief from their symptoms. That said, a large number of patients died in the Crib after going into shock or from heart attacks. The practice was deemed too barbaric for medical use and the Cribs were removed from the hospital in 1887. After that, strait jackets were used to subdue patients in their stead.